Why Most People Got the Texas Power Crisis Wrong

No matter how you look at the deep freeze that took place in Texas more than a week ago, the single, unerring fact that everyone agrees upon is that it was a complete disaster.

Even more troubling was the rampant misinformation that flooded the media headlines.

We’re not talking random Twitter accounts regurgitating some narrative either.

Like everything else lately, it didn’t take long for the political machines to start playing the blame game.

As usual, they got it all wrong.

But hey, "Never let a good crisis go to waste" has been everyone’s mantra lately.

And despite the false narratives being spewed out across social media, here’s the most tragic part of this whole mess...

This situation was entirely avoidable.

Unfortunately, the go-to scapegoat during this crisis was renewable energy.

It made for a sensational story — even the governor of Texas deflected the blame toward “frozen wind turbines.”

That’s not to say that wind power didn’t have its own problems. Approximately 13% of the outages were attributed to wind facilities.

The primary reason why things went from bad to worst-case scenario so quickly was due to the failure to winterize the state’s power plants.

You see, it wasn’t just wind facilities freezing up.

Let me show you how bitterly cold temperatures can knock out a natural gas plant: 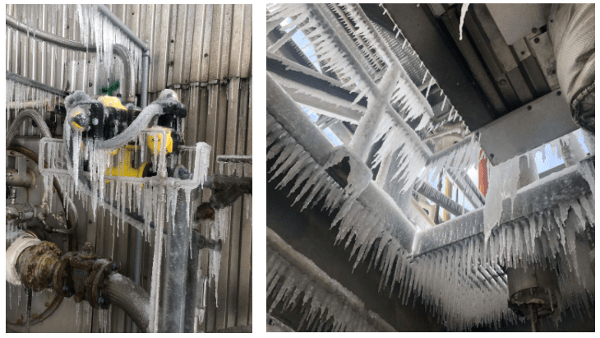 The problem is that as power to the grid came offline, demand surged higher from residents and businesses trying to keep the heat on.

What happened next was straight out of a horror story.

In order to avoid a catastrophic failure, ERCOT (the Electric Reliability Council of Texas), which operates the state’s power grid, decided to start rolling blackouts.

This is how ERCOT’s president explained the situation:

It needed to be addressed immediately. It was seconds and minutes [from failure] given the amount of generation that was coming off the system.

Had this nightmare scenario occurred, it would’ve taken months to restore power to the grid.

Seconds and minutes… Let that sink in for a minute.

What’s Next for Texas… and Investors?

You’ve heard this saying before, haven’t you?

I’ve seen more than a few media outlets talk about this being a “once-in-a-generation” event, that the last deep freeze in Texas was more than 30 years ago in 1989.

They seem to have forgotten their history.

This exact situation actually occurred in 2011.

Back on February 2, 2011, another cold spike led operators to start rolling blackouts across the state. Some customers were left without power for eight hours, but ERCOT failed to learn its lesson.

After investigations into the matter concluded, the recommendation was to winterize the state’s power plants after deficiencies were found.

Of course, the same recommendations were made back in 1989 too.

The problem is that those recommendations weren’t mandatory, so it was business as usual. Life moved on and things went back to normal. The commission in charge of regulating ERCOT failed to force its hand.

Let me ask you: Will these warnings be ignored again?

Yesterday, five ERCOT board members resigned, so it’s safe to say this won’t be overlooked.

The real question is what’s next?

In order to answer this, you have to consider the choices.

It’s clear the state is making a major transition away from coal. Out of the 14 active coal plants in Texas, more than one-third of them are scheduled to close or convert to natural gas over the next decade.

There also hasn’t been a new natural gas plant built in the last 10 years. Although it's easier to get the permitting to build a natural gas plant, it’s not nearly as profitable right now for operators.

Yet there could be another winner that emerges from this recent debacle.

Not only does it generate safer and more reliable power than any other energy source currently, but the technology being developed today can provide Texas residents with localized and sustainable power for their grid.

And I’ll tell you what you need to know about this new technology next week.