Back in November, I competed in my first Spartan Race.

If you’re unfamiliar, this is a race that includes a variety of obstacles such as climbing walls, rope climbs, and A-frame cargo nets. 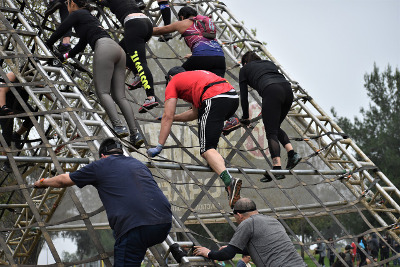 I was supposed to do my first one in 2020, but COVID put the kibosh on that. So when I saw that the race was returning to Boston in 2021, I didn’t hesitate to sign up.

Now, let me preface the rest of this by saying I'm not some kind of elite athlete.

I didn’t play sports in school, and I really only discovered a love for fitness about five years ago after joining a local CrossFit gym, which has actually become my second home. It’s also where I first learned about the Spartan Race after one of my friends put out a call to see if anyone wanted to put together a team for the event.

It was a mix of curiosity and the desire to challenge myself that motivated me to participate. And while I certainly expected a good time, I got much more than I bargained for.

On the morning of November 13, we left our Airbnb and headed straight to Fenway Park, where the race was being held.

Ubers and Lyfts were running pretty pricey that day and we didn’t want to pay for parking, so we decided to walk to the stadium. It was only 3 miles away, and we figured driving those 3 miles instead of walking them kind of defeated the purpose of the day.

When we arrived at Fenway Park, there was an overwhelming sense of community that I hadn’t expected. Thousands of like-minded people had gathered in one place to not only compete but to share something special: a celebration of fitness, healthy competition, and enthusiastic comradery.

It’s almost like we were all a part of the same tribe, although most of us had never met before.

There was no sense of political or racial division.

There was no sense of vitriolic rage or hostility.

There was no sense of sadness or defeatism.

The positive energy was real and palpable. It motivated me. And when they finally let us loose, I tore up the stairs on my way to the first obstacle, which I easily conquered.

The second obstacle was a wall, which I had no problem launching myself over. My landing, however, left much room for improvement as my ankle buckled, twisted, and turned in a quick second, and I lay on the ground cursing like a 10-year-old who just discovered the word “shit.”

I couldn’t believe it.

I wasn’t even sure what had happened.

All I knew was that I was on the ground and not sprinting to the next obstacle.

My team members came over to see if I was OK. I wasn’t. But they waited patiently for me to get back up on my feet. It took about two minutes, and when I stood up, I knew I did some damage. But I also knew it wasn’t broken because I was able to put some weight on it and limp a few feet.

One of the monitors at the event rushed over to see if I needed anything. Ice, crutches, a stretcher. But honestly, my foot could’ve been hanging off my leg, connected only by soft tissue, and I still would’ve rejected the notion that I couldn’t keep going — which is what I did.

I told my team to go on ahead of me, and they reluctantly agreed.

I knew I would be unable to do some of the obstacles at this point, but I had waited too long to do this and I wasn’t going home without crossing the finish line.

So for the next hour, I limped along at an embarrassingly slow pace.

Along the way, I was approached by a number of Spartan staff who kept checking on me. I think they knew I wasn’t going to stop, so they offered both assistance and encouragement. My team did the same, as well as other competitors who saw me struggling. And this wasn’t empty encouragement. It was real. These people not only wanted to make sure I was OK but also wanted to make sure that I was able to finish. I’m certain this was because they would’ve done the same thing: just kept going.

Despite a finishing time that wasn’t even close to what I had hoped for, I made it to the end, where I met with my team and we took pictures. 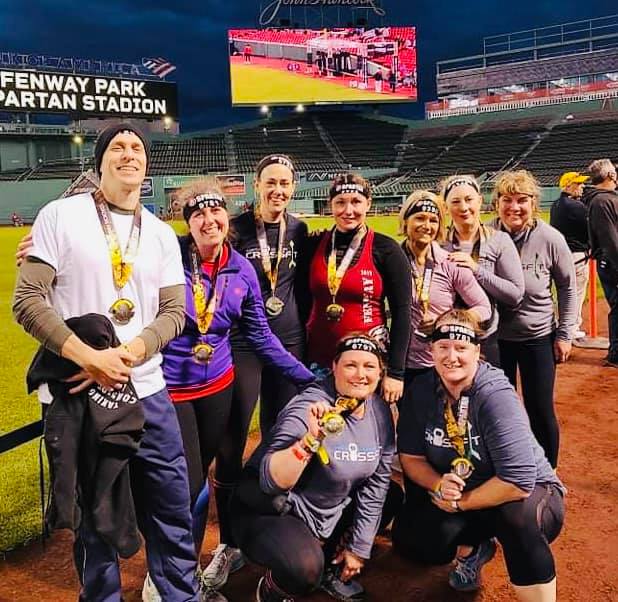 People I didn’t even know came up to me and congratulated me, telling me I had crushed it, given my injury. I wasn’t seen as a burden, potentially slowing down those behind me, but as a competitor, just like them, who refused to accept defeat as an option. And make no mistake, once this ankle heals, I will be back.

When we went back inside the stadium, I was greeted with some food, a T-shirt, and even a bag of ice from one of the staff who I guess saw what happened and took the time to help me out — certainly something I wasn’t expecting but appreciated nonetheless.

It turned out I had torn some ligaments in my fall. It wasn’t pretty.

Here's how it looked that night... 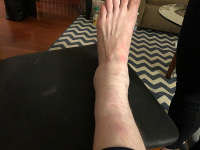 And here's how it looked the next morning...

**Full disclosure: It looked way worse than it felt, and my coaches and doctors assured me that my foot would be back to normal in about four months. I'm also able to continue training with special workouts prescribed by my coaches.**

Given how the day went, you’d think I would’ve left Fenway Park angry, upset, and disheartened. But I wasn’t. Sure, I was disappointed that I was unable to compete the way I wanted to, but I also felt a sense of happiness.

In a world where depression, intolerance, and hostility have become as ubiquitous as smartphones and fast-food joints, it was nice to be in an environment that emanated a strong sense of unity, compassion, and positivity. And when I got back to our Airbnb, with my foot propped up and hidden under a giant bag of ice, I started thinking to myself how much better the world would be if we treated it like a Spartan Race.

I know that may sound silly on the surface, but I’m serious.

Sure, at the event, we were all competitors, but not in a contentious way.

We weren’t wishing for anyone to fail. In fact, we encouraged our competitors to do well. And when others were struggling, we checked in on them and offered assistance if it was needed.

I saw no racial or political divisions either, and I’m guessing that was because those things have no place at a Spartan Race. Our intentions were not to tear each other down but rather to lift each other up. And while that may sound cliche, it’s also accurate.

Who wouldn’t want to live in a world like that?

Imagine a world where individual countries would be open to all people who wanted to share in the joy of healthy competition and mutual respect.

Imagine a world where all of us eschewed sedentary lifestyles, unhealthy food, and mediocrity.

Imagine a world where governments simply provided the foundation for all free people to prosper without state-sponsored control and violence.

Imagine a world where success, progress, and integrity were not only celebrated but encouraged.

If the world were run like a Spartan Race, I truly believe we’d all be a lot happier, healthier, and kinder to each other — a lofty goal but not unreasonable.

So I would encourage anyone, regardless of athletic ability, to participate in a Spartan Race. Experience it for yourself and see what I’m talking about. It’s a great way to spend an afternoon, and I believe you’ll not only find it’s good for your physical health but good for your mental and spiritual health too.