The Next Nuclear Revolution

Thorium for the Win 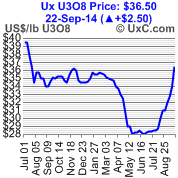 I had so much fun and made so much money back in 2006 and 2007 that I've been waiting for a bottom in uranium so I could do it again.

And as usual after a bubble pops, it has been a long wait.

After finally making a comeback in 2011, uranium was devastated by the Fukushima nuclear disaster. The price fell 50% on that news, as nuclear power was suddenly off the menu.

Japan closed all 50 of its power plants. Germany started to phase out its nuke power plants as well. It has shut down eight out of 17 so far.

But as you can see, the chart of Uranium Participation Corp (TSX: U) has bounced off its lows and broken out of its downtrend. This chart has bottomed. It might run sideways for a bit, but it's not going to fall off the table.

True contrarians will take note and search for undervalued miners with strong balance sheets, with an eye on a 1,000% return.

This year's rally in uranium has been driven by a number of factors including the threat of sanctions against Russia, a labor strike at the world's biggest mine in Canada, and the ending of the USEC deal that turned Russian warheads into fuel. USEC was a large supplier to the U.S. market — today, it's in Chapter 11.

Russia is now in a low-level, CIA-instigated war with the Ukraine and, by proxy, the West. As a result of this, the U.S. has placed sanctions on 15 Russian companies such as Gazprom Neft and OAO Rosneft.

There is a good chance that these tensions will rise and sanctions will expand. Putin has never been more popular at home.

Last year, the U.S. bought 20% of its uranium from Russia. Europe was higher, at 36%. If the conflict in the Ukraine continues to expand, this material might dry up. And given that the utilities that buy the uranium have been buying on short-term contracts due to the falling price, a news-driven spike in price could lead to a rapid reversal as they try to lock in limited supply.

There is a major strike winding down at the McArthur River mine in Canada, which is owned by big dog Cameco (NYSE: CCJ). As I write this, there has been a tentative agreement to put people back to work and restore the 900,000 pounds of supply that has been taken off the market. This would be modestly bearish for the spot price.

To put that in perspective, U.S. utilities purchased 57 million pounds in 2013, and Bloomberg is reporting that the year will end with a glut of 13.2 million pounds.

On the supply side, one must remember the first law of commodities: low prices beget high prices. This is simply because when the price is too low, mines are unprofitable and eventually shut down.

This has been happening since 2011. Kazakhstan halted all output expansions. Paladin Energy closed it Kayelekera operation, and Russia's Atomredmetzoloto shut the Honeymoon mine in Australia.

After Fukushima, Japan shut down all of its nuclear reactors. Last year, it restarted two out of 50.

On the flip side, the nation has enough uranium stockpiled that even if it does restart the 30% of reactors it says are safe, it won't have an immediate impact on the spot price of uranium.

China, on the other hand, will be building five to six new power plants every year for the next 15 years. India is looking to join them.

At some point over the next two years, uranium consumers will start locking in long-term contracts again on fears of rising prices. This is when the price will double and small, highly leveraged uranium suppliers will launch.