Tesla in the Vanguard

Plus, how to trade TSLA stock without ever owning it! 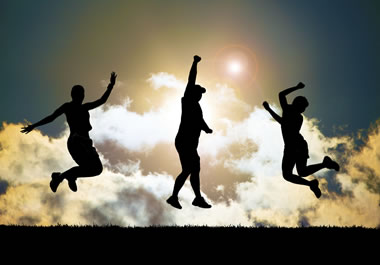 We’ve already had some wild whipsaw action. Tesla Inc. (NASDAQ: TSLA) shares led Vanguard this week after wowing Wall Street with a killer earnings report. The company posted a $3.3 billion quarterly profit and provided guidance that the company will likely produce more than 1.5 million vehicles in 2022, up roughly 60% from last year.

Shares are surging as I type, unlike Netflix Inc. (NASDAQ: NFLX) shares, which sank over 35% after a terrible earnings report, highlighted by a massive decrease in subscribers. As one of the Netflix users who jumped ship about six months ago, I had a gut feeling that NFLX had some underlying issues and that a revamp to the business was needed or else it would hit a wall.

Personally, I think it needs to buy out GameStop Corp. (NYSE: GME) or make a move to purchase a livestreaming service like Discord or some other video-gaming property to make that leap.

But what do I know? I only make money on Wall Street; I don't lose it…

Stock market traders are having a field day with this earnings season action right now.

Admittedly, there’s no exact science to trading into earnings season, but if you ask any market pro what they think about the idea, they will tell you when it’s done right, it can be a great way to score fast, outsized profits.

Generally speaking, when a big-name company is set to report and expectations for an earnings beat are high, we see a strong run-up in share value. This means four times a year, you have a serious chance at scoring big money on short-term trades.

The catalyst for these opportunities is the fact that earnings reports very often cause the largest moves in stocks in a given trading year. A better-than-expected quarterly report can send a stock’s price soaring. Conversely, a less-than-impressive announcement can send shares tumbling.

We can use this action to produce huge gains in just a few days or weeks.

I won’t get into the nitty-gritty of how I drilled down and picked this specific Tesla trade. It’s a long, specific process. I liken it to a “trading gauntlet” of sorts.

(Editor’s note: If you DO like the nitty-gritty and WANT to see my “trading gauntlet,” though, check this out.)

In short, however, you can trade Tesla’s awesome earnings as a bull case for big money, all without ever owning Tesla shares or paying the $1,063-per-share price to get a little stake in the action.

Let’s say, like me, you strongly believe TSLA shares will rise to $1,225 over the next six months. For a bit of context, this would simply be a retracement to its six-month highwater mark of about $1,243 (black line).

Given a 60% increase in total cars delivered for this year, I’m very bullish on this scenario.

One hundred shares of Tesla would cost me over $100,000. That’s way out of reach for most folks. Heck, even $1,063 today for one share means most folks simply can’t afford to get in on this stock.

Here’s what we can do, though. We can naked trade! 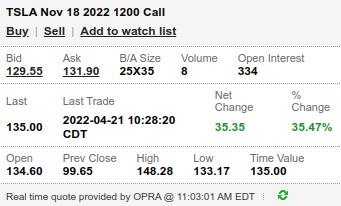 If I can trade TSLA for nearly one-tenth of the price of the actual stock, heck, I’m in!

You should be too!

Because with everything happening in the markets these days, I can honestly tell you that there may never be a better time to put the power of naked trades and my Asymmetric Profits system to work for you.

It’s how I found this specific trade and many others during earnings season. Like when the Naked Trades army banked over 1,100% gains in a few weeks' time on Advanced Micro Devices after AMD posted a blowout Q3 report last October.

Because no matter what’s happening in the markets, these Asymmetric Profits trades can set you up for consistent, fast-moving gains, whether it’s the peak of earnings season or a bull, bear, or sideways market.

For instance, just as an example, remember back in January when we saw one of the worst stock market corrections in recent memory?

Well, again, my Asymmetric Profits strategy closed out a single short-term trade for a 200% profit — during the crash — in less than three weeks!

I even recorded a new video for you to watch to see how it works. You'll see exactly how many times this strategy has worked and how it could work for you in the future.

P.S. I don’t know how long I’ll be able to keep this special Asymmetric Profits event online, so don’t wait. See for yourself how one simple trade, like the 135% trade on Uranium Energy Corp. (NYSE: UEC) the Naked Trades army closed out only a week ago, could change your life! Stop waiting and start making double-, triple-, and even quadruple-digit gains — not in a year or two but in weeks. Watch now!