Out of the Pandemic and Into Innovation (Future Giants Inside)

In 1665, an outbreak of the bubonic plague in England forced the University of Cambridge into lockdown. Sir Isaac Newton, one of the most famous scientific minds we’ve ever seen, was forced to return home while he continued his work.

Despite the horrors the plague brought, in hindsight, this event ultimately paved the way for a great leap in scientific understanding. The story goes on to say that while sitting in his garden at Woolsthorpe Manor one day, Newton saw an apple fall from a tree. This of course famously provided Newton with the inspiration to eventually formulate his law of universal gravitation.

It was a groundbreaking discovery, and this law is at the root of many of the new discoveries we’ve seen over the past 350+ years! There would be no SpaceX or NASA without Sir Isaac Newton. In fact, Newton is so revered in the modern era of scientific discovery that in 2010, a NASA astronaut even carried a piece of the ancient apple tree aboard the space shuttle Atlantis for a mission to the International Space Station!

And today in 2022, the laws Newton discovered are helping solve the global energy crisis for good!

First off, the sun doesn’t always shine and the wind doesn’t always blow. On days like those, there won’t be much solar or wind energy being generated for the grid. There needs to be a supply of energy to serve as a backup during times like that.

Second, when there’s lots of sun and wind, more energy is being produced than the power grid can handle. Solar panels and wind turbines then have to be disconnected to prevent overloading the grid and causing complete blackouts. As a result, massive amounts of energy are permanently lost and can’t ever be used.

For example, California alone loses nearly 200 gigawatt-hours of electricity this way every month. That’s enough to power about 228,050 homes, and it’s all wasted! There needs to be a place where all that excess energy can go and be used at a later time when it’s most needed.

You’re Looking at the Future of Global Energy

Take a look at this strange machine: 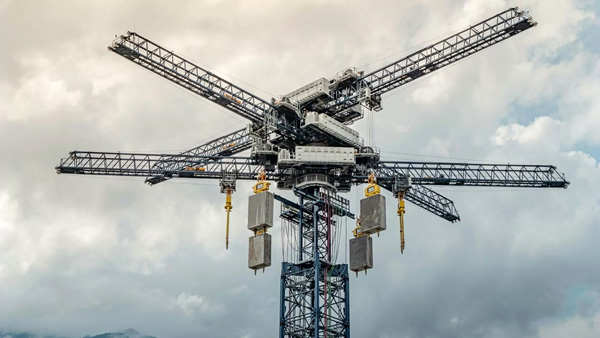 No, this is not a new type of construction crane. It's not an amusement park ride either. But it does solve a major problem.

But it’s not a newfangled solar tower, and it’s definitely not some new wind turbine.

Breaking the norms of conventional “new energy” ideas, this "Newton Battery" breakthrough is unlike anything else the world has ever seen before.

Simply put, the Newton Battery is ushering in a new era in power storage. Thanks to this groundbreaking innovation, clean energy can be fed to the power grid 24/7. Not even nuclear energy can promise that!

By using just gravity, the Newton Battery powers the grid better than any other battery currently on the market — even better than Tesla (NASDAQ: TSLA) batteries! This means its energy is MUCH cheaper to produce than any other energy system on the market, and input to build these structures is cheap too because they don't require special alloys or other hard-to-acquire resources. These batteries are made from mostly concrete and steel.

In short, the Newton Battery is THE best solution to the world’s grid energy storage problem. Grids across the globe will be using this battery before we know it.

But here’s the best part...

The company behind the Newton Battery just went public… and you now have a huge opportunity that could spell colossal new wealth for early investors.