Twelve million Americans killed, another 60 million dead within a year.

In the Soviet Union, 41 million dead, with an estimated 100 million more over the next year... Governments destroyed, economies obliterated, and no reliable medical care available.

These were the dire predictions of a classified commission during the 1950s whose sole objective was to estimate what would happen in the event of a full-scale nuclear war between the United States — which already had 7,000 nuclear warheads at the time — and the USSR, which was quickly stockpiling its own atomic arsenal.

From 1957 through 1963, a group called the Net Evaluation Subcommittee (NES) would present the President in office with its projections of what would happen in the event of a nuclear war with the Soviet Union.

The findings were classified for over 50 years until the National Security Archive finally won the appeal in court to have them declassified (partially) in late July. The projections were so dangerous that the government fought tooth and nail to keep them hushed.

In fact, when the NES slid another set of predictions across JFK's desk in 1961, his first words were, “And we call ourselves the human race.”

Even though our situation today isn't nearly as dire as the nuclear arms race of the '50s and '60s, the general public is still worried about uranium.

Iran has been under sanction from the U.S. and other nations on and off for over three decades, and North Korea's exact nuclear capabilities are still a mystery to us.

And we would be remiss if we didn't include the disasters at Chernobyl, Three Mile Island, and, most recently, Fukushima. The Fukushima disaster managed to bring nuclear power generation to a grinding halt in many countries.

In fact, you can see for yourself how nuclear power production has declined since the catastrophic Fukushima meltdown... 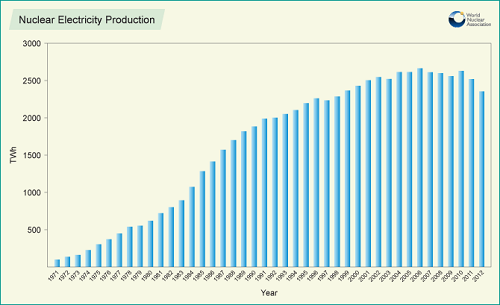 Just two weeks ago, a toxic spill from a mine in British Columbia, Canada caused uranium and other dangerous chemicals to flood into Quesnel Lake, critically damaging it and the land surrounding it.

Thing is, despite all of these problems facing the nuclear energy space due to the rampant fear over uranium...

It doesn’t have to be this way.

We don’t even need uranium to operate nuclear power plants.

An End to Fear

As far-fetched as it sounds, it’s true.

There is another element that is abundant in the U.S., Australia, India, Turkey, Brazil, and a few other countries that has the power to produce even more power than uranium.

And it does so at a much lower cost… 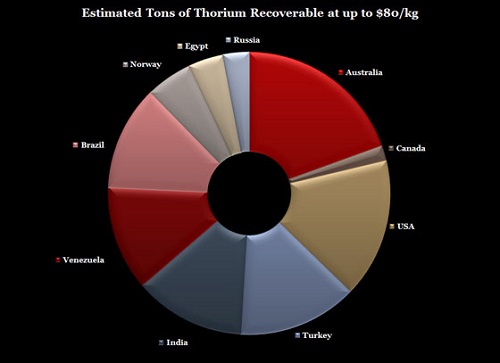 The element I’m talking about is thorium.

Of course, the real kicker here is that thorium power generation doesn’t give off any weapons-grade by-products, and it has a much higher melting point.

In other words, it can’t be used to manufacture nuclear weapons like uranium and plutonium, but it can be used in a nuclear plant with the proper reactor (more on that in a moment) with much less chance of a meltdown.

In fact, the International Atomic Energy Agency has said that the melting point for thorium is 500o Celsius higher than that of uranium. This allows plant operators an extra margin of safety in the case of meltdowns or power failures.

Thorium is shaping up to become the future of nuclear power generation and could easily grow to a multi-billion dollar market in as little as two years' time.

My colleague, Christian DeHaemer, recently uncovered one of the few thorium companies out there that will have a stranglehold on its use in power plants.

You see, the company he found trades under $3 and has a patent on exclusive, state-of-the-art reactor technology that can efficiently and cheaply generate thorium energy.

It’s more powerful than uranium, it’s safer than other forms of nuclear, and it is about to completely alter our energy grid.

The logical next step is for early investors to take advantage of the situation before the investment herd starts pouring in. In fact, you can learn the full details behind Christian's $3 thorium stock in his latest investment report.

Imagine the impact on the nuclear industry when we don't have to worry about meltdowns and nuclear winters... Until then, invest accordingly.