I can tell my girlfriend anything — anything except: “We don’t have time to stop at Starbucks (NASDAQ: SBUX) right now.”

Lucky for me, she lives in an area where there are five Starbucks within a square mile, so I never have to say that, even if time is ticking and we’re on the go. My girlfriend fires up her Starbucks app, places our order, and we’re in and out in no time. Getting our “fix” is almost too easy. And sometimes we get rewards, like free coffee!

Overall, the experience is highly convenient, thoroughly delicious (try the pistachio latte next time they bring it around), and while not as cheap as a cup of coffee at Dunkin’, Starbucks’ blends probably won’t give you heartburn either.

That’s why there are millions of other devout Starbucks customers like my girlfriend out there. They will hit Starbucks every morning before the commute to work like clockwork.

And if their local Starbucks is closed, they will find another before accepting a substitute.

Personally, I like to bring my coffee from home most of the time. But here’s the kicker — 90% of those times, it’s still Starbucks coffee in my tumbler. Sure, sometimes I’ll switch it up to Café du Monde, a wonderful French blend from the famous coffee house in New Orleans, but that’s about it.

The point is most folks who try Starbucks love it and will make it a point to choose the chain whenever possible. That’s not just here in the United States either. Starbucks is in the process of building a global brand that’s as recognizable internationally as The Coca-Cola Co. (NYSE: KO) or Nike Inc. (NYSE: NKE).

This dominance in the coffee industry, along with other technical and fundamental factors, is giving us a flash trade that could hand out a triple-digit return in a week’s time.

Catalyst No. 1 — Coffee Prices Are Soaring

The price of arabica coffee beans is at its highest level since 2016. The Wall Street Journal notes a mix of “insatiable demand” and smaller yields from this year’s harvest has put strong inflationary pressure on price. 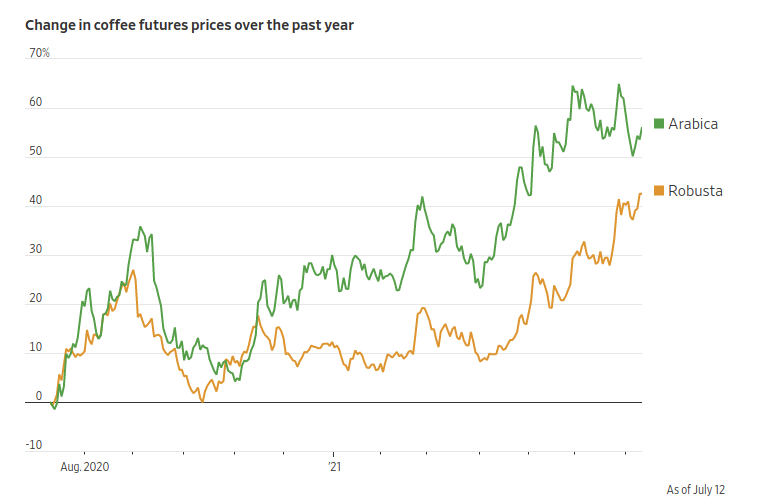 For the most part, this extra cost will get passed onto consumers. But if you think a rise in the price of someone’s caramel latte or Frappuccino is going to make them stop buying their favorite morning treat, you’re mistaken.

As you know, coffee is addictive, and so is the Zen-like feeling a really good cup of coffee can produce against the backdrop of a hectic city commute.

Starbucks may not technically be a necessity, but for many people it’s pretty darn close.

This is and has been a winning formula for Starbucks. And this sets us up nicely for a flash gain ahead of earnings. But that’s not the only tailwind behind our trade today.

Chinese companies with global operations are facing stark reprisals from Chinese regulators. The biggest headline focused on the communist nation’s recent focus on ride-sharing company DiDi Global (NYSE: DIDI). The dragnet involved many other big Chinese tech names as well, including Tencent Holdings (OTC: TCEHY) and Baidu Inc. (NASDAQ: BIDU). What’s clear is that due to these companies’ involvement in foreign investments, they're under significant scrutiny.

Starbucks, as far as my press releases read and inside sources tell me, remains in China’s good graces.

In fact, according to the forward guidance provided by Starbucks during the company’s last earnings call, the company plans to open roughly 600 new locations in China and over 1,100 new international locations in total.

Catalyst No. 3 — SBUX Earnings Are on Deck

On Wednesday, Starbucks announced it will release its third-quarter fiscal-year 2021 financial results after the market close on Tuesday, July 27, 2021, with a conference call to follow at 2:00 p.m. PST.

Starbucks’ business essentially collapsed last year in the wake of the pandemic but has strongly rebounded since then. In its last earnings report, the company issued full-year guidance for fiscal 2021 with EPS in the range of $2.90–$3.00 versus the $2.84 consensus analyst estimates. CEO Kevin Johnson stated full-year 2021 revenues would come in between $28.5 billion and $29.3 billion versus the $28.53 billion consensus analyst estimates.

Its digital business, for example, is turning into a huge revenue driver for the company. The company notes its reward program now has a user base of over 21 million customers.

Expectations that SBUX will beat Wall Street estimates bode well for a run-up in SBUX share value leading into earnings. Plus, we have a great international growth story that I think will wow investors on the upcoming report. Moreover, Starbucks is a “Great Reopening” company, so I expect it to also beat on revenue and sales. And as I mentioned earlier, a soft rise in price across all Starbucks customers should manifest in little to no impact on overall demand.

Let’s Swing for the Fences on SBUX

After spending the last two months trading in a compressed range, SBUX is breaking out.

This is due to high earnings expectations and other tailwinds, as I outlined above. This breakout should run right into earnings, which is the time frame for our trade to pay off (roughly two weeks).

Here’s what to do.

Once you’re in the trade, our goal is to sell the contract as we near the expiration date, ideally at a price of around $2–$3 for over a 100% gain. Keep in mind, however, this is an active management strategy with fast-moving time decay and a high risk factor. We will need to check the prices daily until we reach a gain we're comfortable with based on how much time remains until expiration.

Conversely, if the stock starts to slide further away from our strike price of $123, we will actively manage the downside risk and sell before the option expires, minimizing our losses.

The way we will profit is by selling our call option(s) when in the money for a large percentage gain on our premium.

Since this option expires about two weeks from today, be sure to check back in regularly for new updates on this trade and when to sell for max gains.