The Future is Here: Profit

This is the high-energy green technology that could change everything...

We've heard about the whale-hugging, Birkenstock-wearing, no underarm-shaving, Phish-spawning pseudo-hippies who want to lower the ocean levels and change the weather.

Well, the next time you see one, you can tell him about the one energy source that has zero carbon emissions and yet puts out enough BTUs to power the globe.

And unlike wind power, which chops birds to pieces, or solar that doesn’t work in the dark, this power source makes sense on almost every level.

Check out this chart showing the amount of energy you get from various fuels... 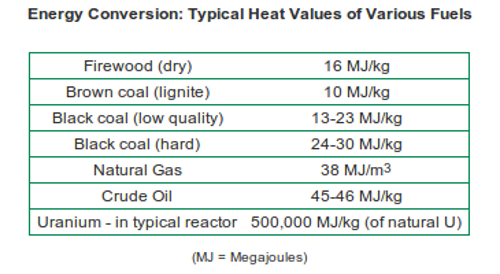 That's right — I'm taking about nuclear energy. Nuclear power trumps all other fuels including coal and natural gas when it comes to energy creation in terms of megajoules per kilogram.

If it weren’t for the safety issues surrounding uranium, there would be nothing stopping nuclear energy from becoming the world's future power supply.

After all, as Mr. Patchouli-stink, tie-dye underwear guy will be the first to stammer, “What about Fukushima, Chernobyl, and Three Mile Island?”

But what if we didn’t need uranium at all?

What if there was another way to use nuclear reactors to develop the same powerful energy?

There is another way to generate the same (if not more) power using a much safer and much more abundant resource...

This resource works in a similar reactor but generates 200 times more power, and it is much more abundant.
It’s not plutonium or hydrogen... It’s named for Thor, the Norse god of thunder, and it's called thorium.

By the Hammer of Thor

According to the International Atomic Energy Agency, the authority on nuclear power, “Thorium fuel has better thermal and physical properties as well as irradiation performance than uranium fuel.”

Not to mention it’s safer. The IAEA said in the same report: “The melting point of thorium dioxide is 500 degrees Celsius higher than that of uranium dioxide. This difference provides an added margin of safety in the event of a temporary power surge or loss of coolant in a reactor.”

Furthermore, thorium is plentiful in the United States and elsewhere on Earth. One of the largest deposits of thorium in the world has been discovered under the Lemhi Pass in Idaho.

Clearly, if there were a way to develop reactors that could produce electricity from the much safer thorium, we could utilize cheap, safe, and abundant energy without causing environmental catastrophes and meltdowns like those that occurred at Three Mile Island, Chernobyl, and Fukushima.

Here's the best part: There is a way to develop these reactors. I recently found a small, $45 million company that holds the sole rights to an advanced technology capable of harnessing thorium in a nuclear reactor.

This isn't some pie-in-the-sky future idea. It's happening right now in India and China.

India is one country that has an abundance of thorium as well as a huge demand for electricity production.

As I write this, India is building a fast breeder reactor at Kalpakkam in Tamil Nadu, likely to be commissioned next year. The 500 MW reactor is part of the second stage in India's three-stage nuclear program.

According to the Hindu Times:

India is one of the leading countries with well-advanced Thorium utilisation technologies and has the world's third largest (around 12 per cent) Thorium reserve.

"For a large growing population of our country, it is important to have a vision of energy independence, implying the necessity for meeting the energy demands using indigenous resources to the maximum extent," [Jitendra] Singh said.

"With this perspective, utilisation of very large resources of Thorium available in the country has been envisioned as an important element of the Indian nuclear programme," he said.

And that's based on uranium nuclear power. Its thorium-based power plants can do even better.

This company is already up 110% after it gained approval of a significant patent. It will go up even higher as the thorium revolution presses forward.