The Deathblow for Oil

You may not have heard the term Metal Oil before.

If you haven't, don't worry; you will soon. Every time I hear it said or read it or even write it myself, there's a little voice in my head scoffing.

However, I am confident that you've heard it called by another name: lithium.

Lithium is poised to become (if it isn't already!) just as essential to our energy needs as oil. And in case you haven't been watching how volatile the energy sector has been over the last year and a half, it might be surprising to learn that lithium is one the very few commodities not losing value.

The price for Metal Oil has been rising, in fact, to about $6,000 per tonne recently; some contracts have gone for as much as $14,000 per tonne in China.

Perhaps it's time for you to take a closer look...

Why Lithium is Not Oil

Look, I understand that calling lithium the “new oil” is bit confusing. You can't turn lithium into gasoline or use it to make plastics. Conversely, you can't use crude oil to store energy in batteries.

It simply stores it.

Now, can that be equally useful? Absolutely.

Think of it like this: The majority of crude oil today is used in various kinds of fuel, for automobiles especially.

Here's a visual breakdown of it for you: 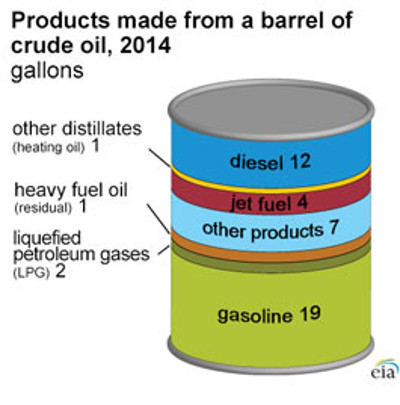 Remember, transportation is the key to crude oil's value. It accounts for 93% of the sector and more than one-third of total energy consumption in the United States.

So with the sudden boom in electric vehicles, it's becoming clear that lithium can hold its own compared to oil in the transportation sector. Even now, when gasoline prices are at multi-year lows and oil supplies are in a glut, EVs are taking off.

And here's yet another difference for investors to look forward to: There's no glut of lithium. An undersupplied market is expected through the medium term simply because lithium, though abundant on Earth, is hard to get.

Unlike oil, you can't just drill down and get a gush of fresh lithium when you need it. It has to be broken out of rocks or dried out of salt brines.

So no, under no circumstances is lithium the same as oil.

Yet it's just as — if not more — profitable than crude.

Why Lithium... Could Beat Oil?

Despite all those differences, there will be plenty of chances for Metal Oil to take crude oil's place in the energy market spotlight.

For starters, there's a good chance electric cars will win out in the end and lithium will take oil's place as the thing that runs cars.

And it's certainly working hard to take oil's place as top energy commodity.

Higher demand and new supply will help drive the Metal Oil boom in 2016.

Estimates for how much oil demand is set to increase in coming years vary, but the EIA expects consumption to grow 2.7% this year and 3.2% next year.

Meanwhile, lithium demand is looking to grow 10% annually, and that's just to begin with. With more electric cars on the market and the global interest in renewable energies and energy storage, that number may yet increase.

In other words, this demand isn't going anywhere.

And although it doesn't diminish my bullish outlook on oil (especially as the market struggles to find a bottom), the last thing I want to do is ignore the lithium revolution taking place. In fact, I've got a whole report I would encourage you to read over now while we're still in the first stages.