Here is the chart of Sotheby’s (NYSE: BID). 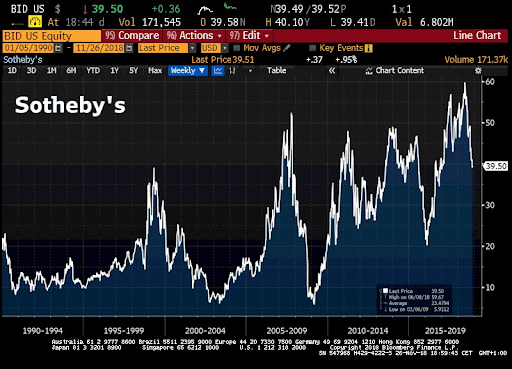 The company sells fine art, decorative art, jewelry, wine, and collectibles internationally. It most recently sold Marie Antoinette jewels for $53.2 million, which set a record. On the downside, a $40 million Vincent van Gogh failed to sell at all.

In the latest quarter, revenue fell by two-thirds, and the company lost $27 million. What you may not know is that the auction house is a bellwether for recessions and market corrections. You can see that a BID sell-off preceded the 2000 and 2008/09 market crashes. It also foresaw the 2015 correction.

Today it is saying that it is better to be a seller than a buyer.

Perhaps this is why gold is starting to get a bid...

Gold has been dead money for the past five years. But this year, the downtrend has broken. And if you connect the lows, you can see that we're starting on an uptrend.

Below is SPDR Gold Shares (NYSE: GLD), the gold ETF: 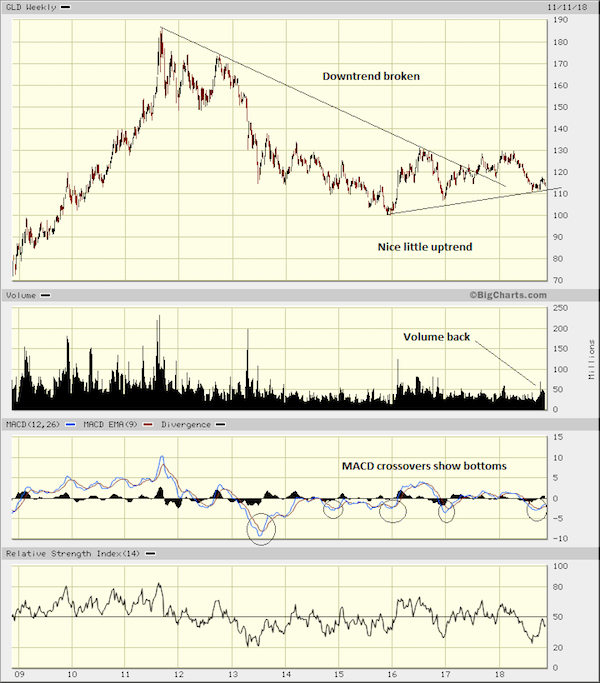 This is bullish. And it is on point that gold would get some early love in a period when the economy seems to be slowing drastically. Traders tend to turn to gold when the markets get fearful.

Furthermore, according to the World Gold Council (WGC), the central banks are buying more gold than have in three years.

The countries buying the most gold are Russia, Turkey, and Kazakhstan. Russia bought 92.2 tons in the third quarter, which pushed its reserves to over 2,000 tons for the first time.

These small gold companies are oversold and have historically jumped up to 3,000% in the right market. One way to play it is by buying the junior gold miner ETF, Direxion Daily Jr Gld Mnrs Bull 3X ETF (NYSE: JNUG).

In addition to gold, I am also long coal. I like it because it is extremely undervalued, and it is booming. A recent New York Times article was titled: “The World Needs to Quit Coal. Why Is It So Hard?”

In it, they wrote:

Home to half the world’s population, Asia accounts for three-fourths of global coal consumption today. More important, it accounts for more than three-fourths of coal plants that are either under construction or in the planning stages — a whopping 1,200 of them, according to Urgewald, a German advocacy group that tracks coal development...

The world’s juggernaut, though, is China. The country consumes half the world’s coal...

That doesn't sound like a dead industry to me. It sounds like a growth industry that is bringing electricity to some of the poorest people in the world.

But the market has priced coal companies as if they are going the way of Blockbuster or Montgomery Ward. Which is why they will pay you a massive amount of money to own them. It’s the best-kept secret on Wall Street.