Friends, the battery revolution is about to hit full swing.

As mobile computing and electric vehicles (EVs) reshape our landscape, the demand for high-quality, longer-lasting batteries has never been more apparent.

A little over a decade ago, Tesla released its first electric car, the Roadster, and single-handedly changed the narrative that an electric car couldn’t succeed.

All major automakers were left behind, eating Tesla’s dust.

Today, Ford, GM, Honda, and Nissan all have fully electric cars on the market.

As international concerns about climate change and the stability of oil in the Middle East grow, there is a growing demand for electric vehicles.

The International Energy Agency expects the current fleet of electric vehicles to triple by 2030.

Due to a recent mandate by the Chinese government that phases out combustion engine vehicles over the long term and accelerates the targets for electric vehicle adoption, electric vehicle sales in China alone are predicted to exceed 5 million per year by 2025.

There is big money to be made in batteries, specifically in their base components. 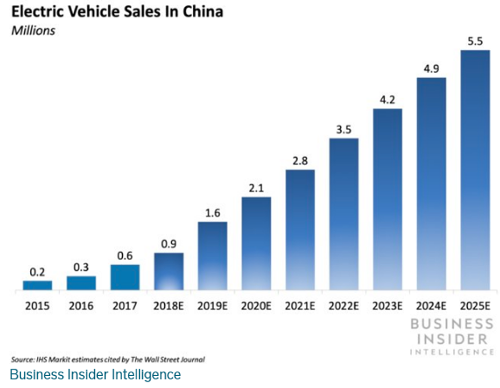 What changed about modern batteries?

First invented in the 1790s by Italian physicist Alessandro Volta, the electric battery has powered the expansion of global industry and productivity.

All batteries rely on the chemical process of reduction and oxidation.

They are separated by an electrolyte — a material through which these electrons can flow. This flow creates an electrical current.

You may recall doing this with a galvanized nail, a penny, and a potato in high school. 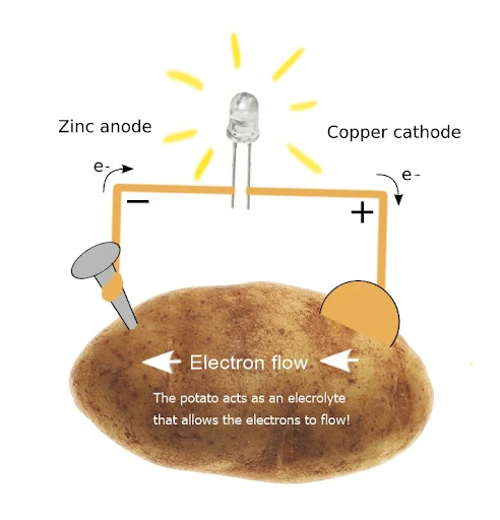 For alkaline batteries, like AA or AAA, this process can only be done once.

The key difference is that rechargeable batteries have anodes and cathodes that allow the electron flow process to work in reverse.

While there are numerous formulations, the rechargeable batteries of today are primarily lithium ion (Li-ion), lithium cobalt (LiCoO2), and lithium manganese (LiMn2O4).

A battery that has lithium in its anode (negative terminal) has a much higher tendency to lose electrons and thus transfer more energy.

Move over, potatoes! The common materials used to construct these batteries are cobalt, copper, lithium, and nickel — and as we’ll discuss in a moment, these are all quite a bit scarcer than the spuds you used in high school.

Everyone from the big automakers to big tech is making a move to secure more raw materials for their batteries.

Here’s what you need to know.

Medieval German miners named cobalt after kobolds, a type of subterranean goblin believed to have made mining difficult, and for good reason — cobalt is exceedingly difficult to mine.

Cobalt only occurs in a few regions in small quantities, along with much larger amounts of other elements such as copper, nickel, or arsenic.

According to the Cobalt Institute, “Roughly 50% of the cobalt produced globally is found in rechargeable batteries.”

Cobalt is used in the cathode (positive terminal) of Li-ion batteries.

It’s an ideal candidate as it is naturally extremely fire-resistant and able to store and transfer large amounts of energy.

Used everywhere from iPhones to EVs, cobalt is among the most vital elements in a modern battery.

More than two-thirds of the world’s mined cobalt comes from the Democratic Republic of the Congo (DRC). With strong EV projections being released, there was a veritable rush for miners to take advantage of high prices.

Then the DRC boosted the cobalt supply just as several cobalt-intensive projects were faltering… and prices crashed.

The current oversupply of cobalt is projected to last until 2023.

The DRC’s state-owned mining monopoly, Gecamines, announced a plan in January 2020 to create a new purchasing company to support prices — but this was hamstrung by the COVID-19 pandemic.

Today, however, thanks to a surge in activity in the electric vehicle sector — and a reduction in supply caused by several mines going offline — prices are starting to recover.

But the variables driving the price of the blue metal are even more complex than those discussed above. Consider the litany of problems in DRC as well.

Geopolitical instability and corruption are commonplace.

Even worse, the DRC cobalt industry is under harsh scrutiny for child labor and human rights violations.

According to UNICEF, as many as 40,000 children were working in mines across southern DRC in 2014. It's a mess.

Add the explosion of EV special-purpose acquisition companies (SPACs) in 2020 into the mix, and it’s easy to see the risks associated with cobalt — but it’s also easy to see its potential as a long-term winner.

Even after having a rocky 2019, cobalt — at over $35,000 per metric ton — is still among the most valuable metals and potentially profitable on the market.

If you want to get into the cobalt game, consider Glencore. Its Mutanda mine, which has been on care and maintenance since August 2019 , is the largest in the world.

The company has also been ramping up production at its Katanga facility in the southern region of the country, allowing it to increase total cobalt production year over year in a rising-price environment while keeping its largest and best-known cobalt asset offline.

The firm’s fundamentals also paint a picture of strength. Glencore has a low forward price-to-earnings (P/E) ratio, indicating rising earnings ahead — and its debt-to-equity ratio is considerably lower than that of many of its peers. It also recently reinstated its dividend.

Lithium has been used for centuries as everything from a treatment for bipolar disorder to an ingredient in the original formulation of 7UP.

Today, nearly 40% of all lithium mined will be used in lithium-ion batteries of some kind.

The buzzword “lithium-ion battery” refers to batteries with a lithium metal oxide cathode (positive terminal) that transfers ions to an anode (negative terminal) of varying materials.

Lithium is prized in battery production for its high energy density, good conductivity, and ease of fabrication.

In 2020, the world’s largest lithium producers were Chile, Australia, and China, with Chile holding approximately 55% of global reserves.

Driven by tremendous growth in the EV market, S&P Global estimates that lithium supplies will need to triple to meet global demand in 2025. 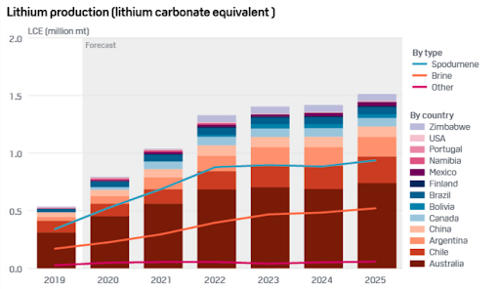 Unlike other investment metals like gold, silver, and copper, there is currently no tradable spot price for lithium.

The company produces it from salt brine deposits in Chile and the U.S. as well as a hard-rock joint venture mine in Australia.

Albemarle is also a global leader in the production of bromine, used in flame retardants and oil-refining catalysts.

Albemarle Corp. is what you could consider the epitome of a pick-and-shovel play on batteries and power storage, as the company produces the core component of today’s staple energy storage technology.

Albemarle's revenue segments are well-diversified, earning 36% from lithium, 29% from bromine, and 31% from refinery catalysts. This is part of the reason why, unlike many other miners, it is profitable on an earnings-per-share (EPS) basis.

The company offers a dividend of roughly 1.01% and has beaten earnings estimates in all but one of the last 20 quarters.

Barring a major shift to alternative materials, Albemarle should be considered a staple of any portfolio looking to gain exposure to rising battery demand.

When used in the cathode (positive terminal) of Li-ion batteries, nickel has a set of distinct advantages.

It offers a longer life and uses less material than other battery metals.

This is why nickel is the hot new thing in EV battery formulations.

To combat fears of “range anxiety” in EVs, carmakers have overwhelmingly turned to nickel battery formulation to allow for larger batteries and thus longer-range vehicles.

Increasing the amount of nickel in a Li-ion battery is a great way to keep costs down while keeping energy density up.

From its second-generation vehicles forward, Tesla turned to a new Li-ion battery formulation.

It’s based on nickel, cobalt, and aluminum (NCA).

These batteries are composed of nearly 50% nickel. 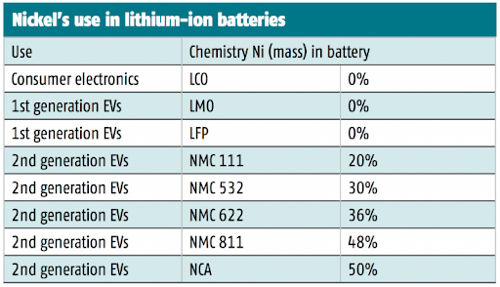 EV batteries are increasingly being constructed with more and more nickel.

With a giant push for EVs coming over the next decade, it’s clear that demand for compact and efficient batteries will rise.

As the world’s largest nickel producer, Rio de Janeiro-based mining firm Vale (NYSE: VALE) is an easy pick here. The company has recently made improvements to some of its biggest nickel-producing assets in Indonesia and the South Atlantic, and now expects its nickel production to hit 220,000 tons per year by 2025.

What’s more, the company has a forward P/E of less than one-sixth of its trailing P/E — indicating that the market expects earnings to rise as much as sixfold in the year ahead. That might sound far-fetched, but the firm has more than doubled its quarterly earnings year over year.

It also pays a whopping 8.11% dividend at the time of writing — far higher than investors can find from most American companies.

While it has myriad uses, copper truly shines as the basis for most electrical wiring.

In fact, 66% of copper in use is utilized for electrical applications.

Copper is absolutely everywhere. Everything that plugs into a wall probably has copper wire in it somewhere.

If the power plant were the heart of the electrical grid, its veins would be made of copper.

It's not a stretch to say copper is just as important to the electrical system as any generation method or storage system. 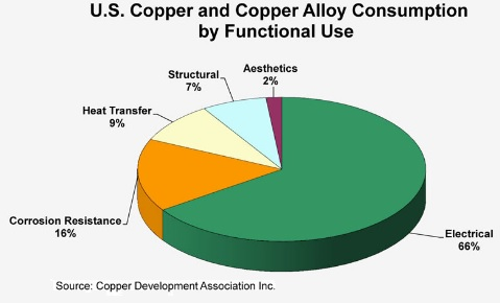 Given its wide range of uses in so many industries, the global economy uses an increasing amount of it. And the copper-intensive nature of EV engine production is only stoking the copper bull market further.

A report by the World Bank estimates a 10-fold rise in demand for copper by 2050.

As corporations and consumers alike continue to push for renewable energy and EVs, expect copper demand to rise.

Phoenix, Arizona-based Freeport-McMoRan (NYSE: FCX) is the world’s largest publicly traded copper producer — and it expects its copper sales to rise by at least 18.7% this year, thanks to a production ramp-up at its Indonesian Grasberg mine.

The company also has a reasonable forward P/E, which is below 20 at the time of writing, and it recently reinstated its dividend.