Are we finally getting a glimpse of the aftermath of COVID-19?

Look, I know it’s far too early to suggest that we’ve gotten past this pandemic.

Last Friday, the U.S. reported its highest one-day number of new COVID-19 cases. That day, 75,821 people joined 4 million others in testing positive for the virus.

At last count, more than 144,000 COVID-19 deaths have been recorded across the United States.

Although it seems we can't see the light at the end of the tunnel from where we're standing today, we can get a clearer picture of this pandemic's consequences.

According to the EIA, global liquid fuel consumption plummeted to around 85 million barrels per day in the early days of the lockdown: 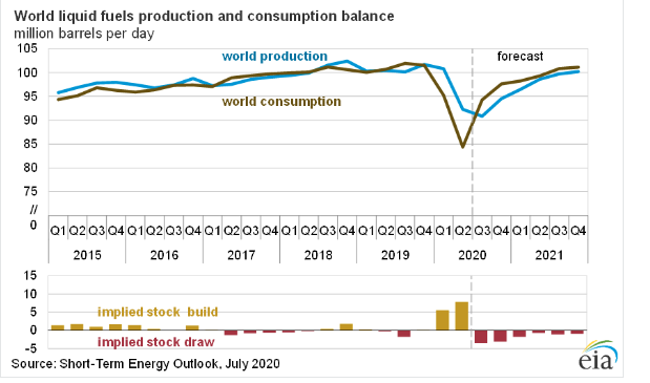 Now factor in the uncertainty regarding our mitigation and reopening strategies, and it’s not too far-fetched to see us reach new levels of this crisis.

And even though the EIA expects a sharp rebound in demand as we head through the second half of 2020, there’s really just one thing that can spoil it all.

Last week, the oil cartel and its closest friends sat down for yet another videoconference.

There were the usual talking points, such as the need for 100% compliance from all participating countries.

All is well on that front, they tell us, with OPEC and non-OPEC countries achieving a 107% compliance rate in June… assuming we can take them at their word. The idea of OPEC members adhering to production quotas has been a running joke for decades.

Then we get to the real question at hand for OPEC+.

Will it keep the production-cut deal in place?

If you recall, the production-cut deal is supposed to take 9.7 million barrels per day from the supply.

Those cuts are set to drop to 7.7 million barrels per day until December.

The Secretary General of OPEC, Mohammad Barkindo, has already hinted that things are getting better by the day. He was optimistic that the reopening efforts taking place around the world have led to a resurgence in demand.

OPEC expects excess supply from easing cuts will be consumed by that growing demand, but it is unwilling to make any drastic changes to the deal.

In other words, it's taking a wait-and-see approach.

Thing is... it may have already won.

The Aftermath of COVID-19

The question in my mind has never been if but rather when. And the one thorn that has been sticking in the side of OPEC for the better part of a decade has been a group of tight oil drillers inside the United States.

We’ve watched for years as OPEC tried its best to undermine those drillers. It's tried everything, from crashing prices by flooding the market to flat out buying major U.S. oil assets.

But, where the oil cartel has failed, it seems COVID-19 may prove successful.

You see, the U.S. oil patch is walking a rocky path right now, and companies have slashed spending across the board just to stay afloat.

That alone is going to have a powerful effect on U.S. output in 2021.

It’s not all doom and gloom, however, because Big Oil is using its most effective weapon right now: cash.

Want proof? Well, just take a look at the latest bid by Chevron to buy Noble Energy. Chevron opened up its war chest to the tune of $5 billion to acquire Noble, and it was more than willing to pay a premium for those shares.

In the coming months, I expect we’ll see U.S. oil production decline by a wider margin than most investors might think.

More importantly, they know exactly where to look to find all the oil they’ll need in the future.

It’s only a matter of time.

You want to know how to make a killing in the post-COVID-19 oil world?

Let me tell you about a 3.7 billion-barrel treasure chest that’s starting to attract Big Oil’s attention.

All the details behind this massive new field are right here.