According to Apple, You’ll Die Without This

Last summer, Apple unveiled a charming old-timey vignette of a farmer losing his iPhone in a bale of hay.

Luckily, his Apple Watch is there to save the day. He quickly finds the lost phone and then stoically returns to his daily grind.

Apparently that folksy metaphor didn't pack quite enough punch for Apple’s marketing department, so it recently decided to kick it up several notches. 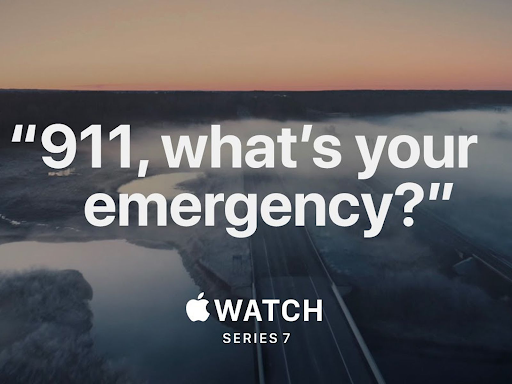 That’s right, Apple’s newest ads are evoking one of the industry’s oldest and most respected advertising techniques: terrifying your audience.

The series of short videos features the real audio of 911 emergency calls, all made on Apple Watches. A farmer with a broken leg, a paddleboarder swept out to sea, and a driver whose car overturned all owe their rescue to the Apple Watch 7’s newest feature: cellular connectivity.

In one instance, the wearer was knocked unconscious by a mountain bike fall. That particular ad simply featured Siri’s voice stating that her master had taken a hard fall and then helpfully reading out her exact GPS location.

The content itself is a bit heavy-handed if you ask me, but I understand what Apple is aiming for here. The message is short and simple: You don't just want the Apple Watch — you need it.

Each watch contains thousands of times more computing power than we used to send Apollo 11 to the moon, but I’d wager that most users don’t take advantage of it.

For most people, myself included, the watch’s main purpose is to either ignore spam calls or, like the farmer I mentioned above, ping a lost iPhone.

At that point, the watch is nothing more than a $400 pager. It’s like buying a new computer just to tell you the weather.

But according to leaked info and rumors from Apple's R&D department, that won’t be the case for much longer.

Apple is working extremely hard on making sure its wearables become a necessary part of human life. These recent ads highlight one of the simplest and arguably most important points: This watch can save your life.

Of course, creating a device that can make good on that promise has been a long and painfully slow process — even for one of the biggest companies on the planet.

Even the very first generation of Apple Watch used a heartbeat sensor. But by itself, this feature is pretty much useless. Anyone can measure their heart rate using two fingers and a clock.

Six iterations went by before the engineers went one step further by adding blood oxygen measurement and an electrocardiogram (ECG), making the watch only slightly less useless from a medical standpoint.

Now, the current devices are a far cry from replacing a trip to the doctor’s office, but that seems to be the direction the entire wearables industry is heading. Apple is spending millions to develop next-gen medical sensors that will one day end up on your wrist.

According to leaks from unnamed Apple employees, there’s a secret project going on in the company’s most closely guarded lab. The technology that’s in development will be the biggest upgrade Apple Watches have gotten by far.

Check out everything we know about this unannounced “Operation Red Light” here, no registration required.